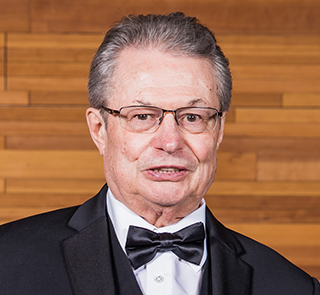 Born in Springhill, Nova Scotia, Dr. Peter N. Calder served five years in the Canadian Armed Forces prior to entering St. Francis Xavier University in 1958. In 1963 he graduated from NSTC (now Dalhousie University) with a degree in mining engineering, and joined the Iron Ore Company of Canada in Labrador City, becoming mine superintendent two years later.

Dr. Calder attended McGill University after being awarded a Canadian Mineral Industry Foundation scholarship and received a post-graduate diploma prior to attending Queen’s University where he received an M.Sc. and PhD degrees in mining engineering.  He joined the faculty of the Queen’s Mining Engineering Department in 1970 and was head of that department from 1980 to 1990. Upon retiring as a regular faculty member in 1997, he was honoured by being designated as a Queen’s Emeritus Professor. At the Pontifica Universidad Catolica de Chile from 1997 to 2001, he served as the first Canadian Mining Chair, and full professor within the Faculty of Engineering’s Mining Department.